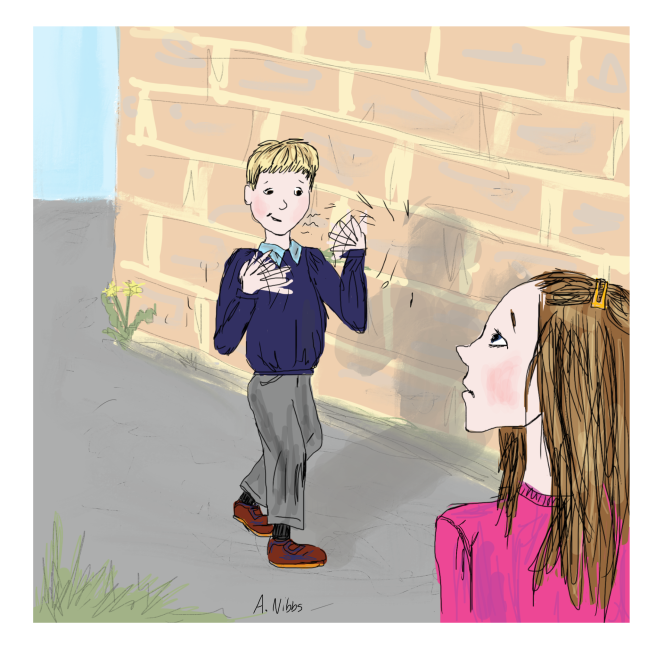 Sometime around 1988 (28 years before autism identification).

He’s not in my class. He’s a bit younger, I think.

Most of the time, I see him on his own at break times, walking round and round the primary school buildings. Always anti-clockwise.

He moves his hands vigorously. He flaps them, but one hand seems to move from side to side, the other up and down. They’re held up in front of his face.

He makes noises as he flaps his hands.

They sound like a motor engine, and so I assume that his hand movements are a crude, inaccurate attempt at mimicking the actions of a driver behind the wheel of a car. I suppose he must like cars.

He doesn’t say much. I don’t think I’ve ever heard him speak. I’ve seen him cry, though. He seems to cry at lots of things. He wails. Wordless. He thrashes his arms as he does so. I don’t know why he’s so upset all the time.

There are times when I feel sorry for him. He looks even lonelier than I am. Or at least I assume he is – I’m often on my own too.

I like to be alone sometimes, and I often get annoyed when people try to insist that I join in with games at breaktime when I want to wander past the trees at the edge of the school grounds. And I feel lonely because everyone else is enjoying the thing we’re all doing, but I’m not. Other times, I’d like to play, but they don’t want me around. Then I feel really lonely.

At least I can talk to the other children when I need to.

But I wouldn’t know how to communicate with him. Sometimes I’ve been a bit scared of him, of his strange behaviour. I might even have pushed him out of my way once or twice. That probably wasn’t very nice of me.

All the other kids say he’s weird. Aside from a few of the more considerate girls, most are clear they wouldn’t want anything to do with him.

I don’t say much about it. I’m complicit in my silence but, after all, I’m weird enough myself. I give people enough ammunition to tease me already. Better just to go along with the consensus.

I wouldn’t want to draw any more attention to myself by disagreeing with what they’re saying about the weird boy.

[Image description: Digital painting of a white, blond-haired boy vigorously flapping his hands while walking. A white, brown-haired girl stands in the foreground, looking over her shoulder at him.]

A blog about zines relating to autism and autisitic people.

Roses are Red for Autism

Life is beautiful the autistic way

Not Too Trapped In My Head Anymore

Ink has the power to make my thoughts last forever.

Speak Without a Voice

The Boy Who Learned to Speak Without a Voice

Thoughts on all things Autism and mental health

The Autism Spectrum According to Autistic People

A Dad trying to cope with the loss of his Partner and becoming a single parent.

i write things, usually about disability

Working with organizations and individuals who want to create truly inclusive spaces.

Just a squirrel learning to cope with neurodivergency in a Neruotypical world.

Just a squirrel learning to cope with neurodivergency in a Neruotypical world.

Autism Is My Superpower

Essays and poetry about autism, neurodivergence, disability, and life

Working through my personal journey, coming to terms with my ASD diagnosis

Meanwhile, in the real world...

Recently diagnosed autistic mother, trying to build a better life for us all

a creative life on the spectrum

Musings from an Autistic woman

Lost and Found
Faith and Food

The personal reflections and practical discoveries of a diagnosed autistic celiac

How am I autistic? Let me count the ways

It Must Be Mum

autspicious
I am not shy.

I am not shy; I have Selective Mutism

May her words bring peace for tomorrow

Musings on my adult diagnosis of Aspergers

Musings and insight from my disabled life

"Demand avoidance is a way of life for you, isn't it?"

These are the falling years.

The long haul of the spectrum

Autistic, queer writer with mental health disabilities. I like to write about community, the historical context for modern ableism, and policy issues affecting disabled people. Blog posts contain lots of heavy stuff like abuse and violence, institutions, and eugenics.